In one of our previous articles, we analyzed what a UEBA solution is. Today, let’s talk about five levels of user behavior monitoring.

A UEBA system allows you to take your insider threat protection program to the next level. It enforces traditional monitoring and detection tools with a proactive approach to threat detection and constant self-improvement.

Gartner predicts that by 2022, UEBA technologies will be embedded in 80% of threat detection and incident prioritization solutions. 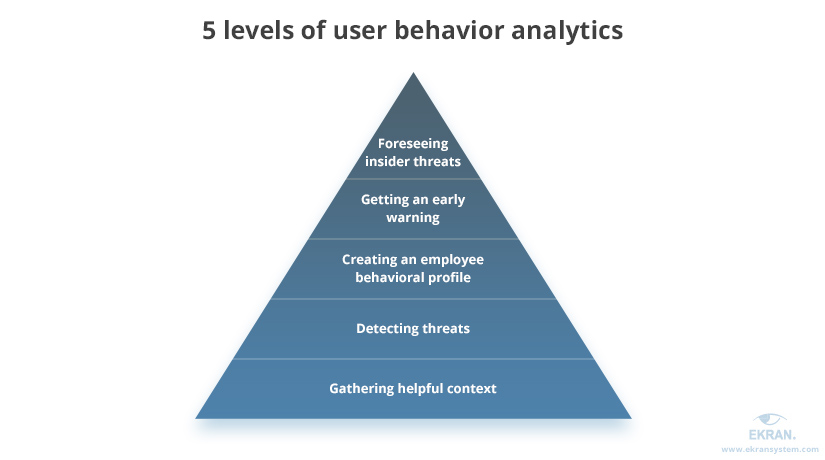 The first stage of user behavior monitoring is collecting data on the system, entities, and events the UEBA solution needs to analyze.

Each UEBA solution records a unique dataset according to the use cases it covers. For example, UEBA software might collect the following information about users’ activity:

The effectiveness of all other levels of behavior monitoring fully depends on the data a UEBA system analyzes.

Some UEBA solutions are able to collect the necessary information by themselves. However, it’s best to create a dedicated user activity monitoring program for that. There are two key reasons:

How can you use a UEBA solution?

UEBA software can aid your insider threat strategy by allowing you to do several things:

At this stage, a UEBA solution makes your insider threat security tools more effective, but it isn’t useful on its own. It still requires an accurate description of the violation it has to detect, mechanisms for alerting, and tools for further investigation.

It’s best to integrate such user behavior analytics with other cybersecurity solutions for better protection.

In psychology, a behavioral profile describes characteristics and behavioral patterns of individuals or groups. In insider threat detection, behavioral profiles are used to create a baseline of user behavior. This baseline helps the system detect abnormal user actions. Also, using the baseline, a security officer can outline a portrait of a malicious insider.

A user profile contains a set of actions typical for a certain employee based on monitoring data collected during the baseline period. If there’s a change in this behavior, the solution compares it to the typical behavior of other users in the peer group and known patterns of insider threats, then alerts a security officer f there are any red flags.

Such functionality is useful for incident anticipation. It’s also the basis for your behavior monitoring program.

Additionally, machine learning and semantic analysis algorithms allow for detecting human emotion in written texts (emails, messages, documents, etc). This is helpful for detecting a disgruntled employee before they turn into a malicious insider.

Portraits of insiders are based on investigations of previous security violations. By analyzing them, a UEBA figures out patterns that indicate malicious intent. These can be a useful addition for alert-based incident response.

Read also: Insider Threat Techniques and Methods to Detect Them

How does behavioral profiling work?

A UEBA system analyzes collected data in order to determine normal user and entity behavior and establish patterns that indicate malicious activity. Depending on the amount of data collected and the complexity of the analysis, establishing baseline user behavior may take from one week to several months.

At this stage, it’s best to combine automatic behavior analysis with inputs from security officers. Manual investigation helps to avoid false-positive alarms in the future.

When are behavioral profiles helpful?

At this stage, there are legal and moral issues you need to consider. Sometimes, it takes years for a loyal employee to turn into a malicious insider. Some companies suggest both monitoring user activity on the network and tracking social media activity. If you do this, make sure it’s reflected in your cybersecurity policy and your employees are aware of it.

Level 4: Getting an early warning

Levels 4 and 5 represent the most powerful types of user behavior analytics. Using machine learning and statistical analysis, they predict cybersecurity violations based on collected data. The main difference between these levels lies in when the UEBA solution uncovers a potential trespasser. Level 4 and 5 systems are useful for detecting:

At level 4, a UEBA solution picks up anomalies in employee behavior that indicate malicious intent. An early warning means an incident is detected before data loss happens — usually when an attacker is only planning malicious actions. At this point, a rogue employee has decided to steal or corrupt company data but hasn’t yet decided on the time, tools, scale, etc.

When working with a UEBA solution of this level, you have to be careful how you interpret the results of analysis. User and entity profiling and machine learning analysis can produce false positives. It’s best to review behavior profiles manually, especially for users with access privileges.

If a user consistently breaks cybersecurity rules (e.g. logs into a server outside work hours to work from home), the UEBA solution will mark such behavior as normal. However, such actions expose the network and may lead to a data leak.

Therefore, it’s best to conduct an additional analysis before taking any action based on a UEBA alert. In these cases, organizations still have to rely partly on their own rules instead of purely relying on statistical analysis and profiling.

At the final level, a UEBA solution is able to create an insider risk score for users long before they commit an attack. This is done without any input from a security officer. An insider threat prediction is usually based on:

Indicators of a turn toward negative behavior are best detected through psycholinguistic indicators, such as emails and messages, posts on social media, and text shared via other channels.

Can you trust such a system completely?

Though a UEBA is a useful tool for a security officer, its results should be closely checked before any actions are taken. False-positive results are highly possible at this level. In order to decrease their number, you can:

User behavior monitoring is effective for detecting and preventing insider threats. Combining it with more traditional cybersecurity tools provides you with a clear picture of your network and user actions.

The choice of a suitable level of user behavior monitoring depends on the use cases a company needs to cover. Ekran System is equipped with a vast toolset for insider threat detection:

You might want to look at several Ekran System competitors before making a decision.