Cybersecurity Breaches Caused by Insiders: Types, Consequences, and Ways to Prevent Them

Security incidents are often hard to detect and tend to go unnoticed for far too long. They’re also time-consuming to investigate, since gathering evidence and correlating facts may take months or even years. For instance, the graphic design website Canva became aware of the theft of user credentials for almost a million accounts only seven months after the actual incident. That’s why it’s better to put your effort into preventing incidents rather than handling their consequences.

A cybersecurity breach is a security incident that results in unauthorized access to an organization’s protected systems and data. It’s an early-stage violation that can lead to consequences like system damage and data loss.

The terms security breach and data breach are often used interchangeably because these events usually come hand in hand. A cybersecurity breach occurs first when an unauthorized party bypasses security measures to get inside the protected perimeter and gain access to company accounts, intellectual property, and personal information of customers and employees. A data breach is what happens next when the unauthorized party steals confidential information and compromises it.

Security breaches can happen to any organization and lead to the following consequences:

There are dozens of ways to breach an organization’s cybersecurity, including various malware attacks, phishing emails, and DoS, DDoS, and XSS attacks. However, cybersecurity incidents don’t only happen because of intruders from outside an organization.

There's a lot of examples of internal data breaches. Malicious insiders can use their legitimate access rights to intentionally compromise sensitive data and harm a company. For instance, opportunistic attackers may spot vulnerabilities in a system and wait for a convenient moment to take advantage of them. Cybersecurity breaches and threats can also be caused by unintentional insiders due to human errors.

2. A former employee of the Desjardins Group, a Canadian financial services cooperative, shared the personal information of around 2.7 million people and 173,000 businesses.

5. Singaporean doctor Ler Teck Siang misused his privileged access to confidential information and shared screenshots of the Singaporean HIV Registry with US citizen Mikhy Farrera Brochez. As a result, a database with the names and addresses of 14,200 people was leaked in 2019.

Cybersecurity breaches caused by insider threats are often the most challenging to detect, and the more time you need to identify them, the more harm these breaches can cause. Not to mention such incidents usually lead to significant penalties for non-compliance with cybersecurity regulations.

Let’s take a closer look at insider threats, define their types, and explore ways to mitigate and prevent data breaches caused by insiders.

The danger of insider threats

According to CERT, an insider threat is the potential for an individual who currently has or previously had authorized access to an organization’s assets to use this access, either maliciously or unintentionally, in a way that could negatively affect the organization.

The Verizon 2020 Data Breach Investigations Report discovered that 30% of data breaches in 2019 involved internal actors. Such incidents happen across all industries. However, some are more often affected than others.

Malicious insiders pose the greatest threat to government, healthcare, financial, and educational institutions, since such institutions store valuable data that can be sold. The Cost of Insider Threats 2020 report by IBM says that the industries with the fastest-growing rates of insider threats from 2018 to 2019 were retail, with a 38% two-year increase, and financial services, with a 20% two-year increase.

The negative impact of cybersecurity breaches includes financial losses that vary depending on the type of incident and the damage caused: 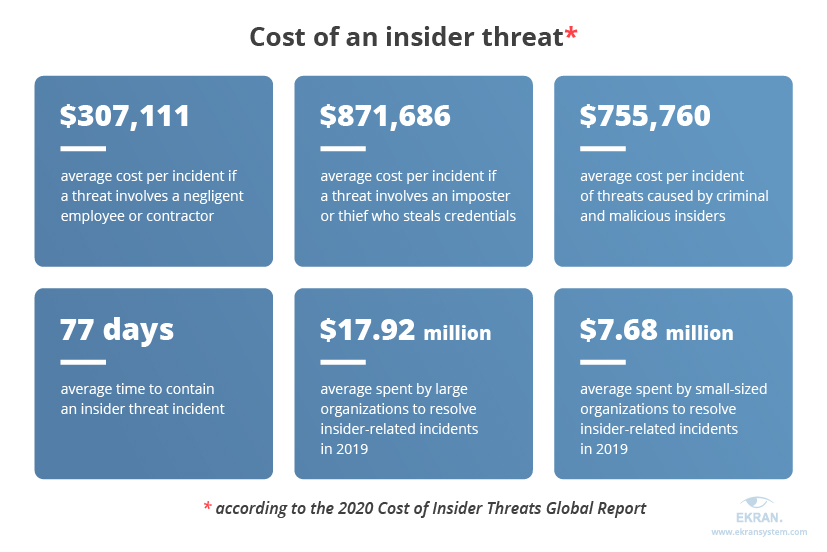 Besides the fact that insider threats are widespread, they’re also particularly challenging to deal with. There are three main factors that make insider threats dangerous:

1. Insider attacks are hard to detect

Any person with legitimate access to sensitive data and an organization’s infrastructure can be considered an insider once they take malicious actions. The scope of access to critical data determines the level of risk an employee poses. If employees have unlimited access to sensitive data, it’s very hard to distinguish potential security violations from their regular work routines. As a result, it can take months or even years to detect data theft or privilege misuse.

2. Insider attacks are costly to remediate

Even if a data breach is detected right away, it can be quite expensive to remediate because of:

The longer a breach stays undetected, the higher these costs rise. If an attack is successful, a malicious actor usually stays in the system and keeps compromising data, which increases remediation costs.

3. Insider attacks are hard to investigate

The fact that insider attacks are so hard to detect contributes to the difficulty of investigation. Also, it may be easy for a tech-savvy insider with privileged access to cover up traces of their misuse. Even if perpetrators get caught, they can always deny any malicious intent and claim that what happened was an unintentional mistake.

There are numerous scenarios for insider breaches, and it’s impossible to be prepared for everything. However, we can define types of incidents that occur frequently enough and affect companies across a wide enough range of industries to be considered more or less universal.

Let’s look at four types of insider-related incidents. By putting controls in place that cover these four cases, you’ll be able to secure your systems from the majority of insider threats regardless of your industry and the size of your company.

Privileged users are the most dangerous insiders since they have elevated access rights and more opportunities to leak data by mistake, misuse data, or steal sensitive information than anyone else within your company.

One of the most frequent results of an insider attack by privileged users is fraud via data misuse. Employees often look up clients’ personal information and then sell it, leverage it for personal gain, or use it for fraudulent transactions.

The best practices to prevent and mitigate data misuse by privileged users are limiting the number of privileged users, monitoring user actions, and controlling access to sensitive data.

Limit the number of privileged users

The fewer users have access to sensitive data, the easier it is to protect your company from insider attacks. Therefore, you should use the principle of least privilege to limit the number of privileges granted, providing users with the minimum level of access rights they require to perform their daily tasks.

It’s essential to be able to clearly see what privileged users do with your company’s sensitive data. User action monitoring software provides full video recordings of user activity, allowing you to see exactly what’s going on and act immediately when suspicious activity is detected.

Make sure to grant access to sensitive data and resources only to verified users. Consider implementing just-in-time privileged access management to minimize the chances for malicious insiders to compromise sensitive data. Conduct regular user access reviews to re-evaluate user roles, access rights, and privileges. Also, it’s always a good practice to establish an additional layer of login protection. For instance, you can benefit from secondary authentication to enhance user verification and identify users of shared accounts.

As do privileged users, subcontractors and third-party providers often have remote access to (and can misuse) company infrastructure and sensitive data.

Even if your third-party contractors are honest and reliable, there’s no way to control what’s happening on their end. So you can’t be sure that a subcontractor upholds high security standards.

Preventing insider attacks by subcontractors and third-party vendors is challenging but possible. Here are three steps to control third-party activity:

Evaluate the security of third-party vendors

Do your research before hiring third-party vendors. This should include conducting a complete overview of a vendor’s security controls and checking for relevant security certificates. Beyond that, put your expectations regarding cybersecurity into your contract with a third-party vendor. Formalizing security standards and procedures in a written agreement allows you to enforce them in the future.

It’s extremely important to know what subcontractors and third parties are doing with your company’s sensitive data, and the only way to reliably do this is to have full recordings of every session available when necessary.

Another way to limit potential cybersecurity breaches by subcontractors is to limit their access to your infrastructure as much as possible. To this effect, you can use temporary access solutions such as one-time passwords to grant third parties access only when they need it. A system administrator can manually approve each connection, or you can set automatic approval for certain use cases.

Industrial espionage is an illegal and unethical way of collecting corporate data (intellectual property, trade secrets, client information, financial data, or marketing secrets) and using it to gain a competitive or personal advantage.

Industrial espionage can be performed by malicious insiders or former workers. This is why it’s vital to keep an eye on employees who either have received notice of termination or have decided to quit on their own. Such employees often think they don’t have anything to lose and may want to take advantage of their final weeks in the office to misuse or compromise data.

The best practices to prevent cybersecurity breaches and detect signs of industrial espionage are:

Sometimes, employees can perform industrial espionage because of personal issues, conflicts with colleagues and executives, or burnout at work. Such issues can be spotted by HR managers during regular meetings or detected by UEBA tools.

Read also: How to Detect and Prevent Industrial Espionage

Not all insider-related data breaches are caused by malicious perpetrators. Employees often make mistakes like interacting with phishing emails. There are many examples of human errors in computer security that eventually lead to data breaches.

Your best bet is to detect mistakes quickly and remediate them as soon as possible. Often, employees themselves don’t realize they’ve made mistakes. In this situation, traditional insider threat detection techniques can prove effective.

Hackers use phishing emails to infect computers with malware, allowing them to easily access your infrastructure and sensitive data. Such emails are often used in tandem with social engineering to trick employees into revealing their credentials to a perpetrator. You can minimize the chances of such incidents succeeding by setting up spam filters and keeping all of your organization’s software up to date.

A cybersecurity policy enforces a formal set of rules that your employees should follow. A written policy reduces the number of mistakes due to misunderstandings and increases the effectiveness of security controls that are already in place.

Make sure your employees understand the importance of proper cybersecurity procedures. By teaching them why it’s necessary to follow all cybersecurity rules, you transform your employees into assets in your fight for data security. Cybersecurity awareness among employees will not only reduce mistakes but help you detect both malicious and inadvertent data breaches quicker.

User activity monitoring is the best way to detect any data breaches that originate within your organization. Activity monitoring solutions can spot unusual activity and instantly warn security personnel. Tamper-proof session recordings can also be used to investigate incidents and clearly show whether a security breach was caused by a malicious or inadvertent action.

By deploying Ekran System, you can leverage its numerous benefits to secure your data from malicious insiders:

Moreover, you can use Ekran System as your dedicated software for complying with requirements imposed by NIST 800-53, SWIFT CSP, HIPAA, GDPR, FISMA, and PCI DSS.

Knowing the most common types and consequences of cybersecurity breaches caused by insiders is essential to understand the risks and establish robust cybersecurity within your organization. Insider threats shouldn’t be underestimated, since such incidents cause much harm if they aren’t immediately detected.

With Ekran System, you can effectively deter, detect, and disrupt insider threats. Leverage the advanced monitoring functionality to keep an eye on all users who can access your organization’s data and prevent data breaches with customized alerts on abnormal user activity.