Employees occasionally make mistakes without realizing how dangerous they can be to the organization’s cybersecurity. Human mistakes were the cause of 21% of data breaches in 2018, according to the 2019 Verizon Data Breach Investigations Report.

Employees’ cybersecurity errors can impede company operations or even affect the bottom line. Therefore, it’s better for executives to prevent employees from making cybersecurity mistakes than to remediate their consequences. In this article, we show the latest statistics on employee mistakes and their impact on corporate security, list the top four mistakes employees make, and offer the most reliable practices to prevent them.

How dangerous are human errors for your cybersecurity?

Despite all the modern security solutions and corporate policies, employees still make mistakes that may lead to data breaches:

Sure, the cost of a data breach caused by human error or system failure usually is significantly lower than the cost of a breach caused by a hacker or a malicious insider. However, you shouldn’t underestimate the consequences of employee negligence. The 2019 Cost of a Data Breach Report by the Ponemon Institute, based on interviews with companies who experienced a data breach between July 2018 and April 2019, found that the average cost of inadvertent breaches from human error is $3.5 million.

According to the Ponemon study, negligence of employees or contractors is the root cause for 24% of data breaches. Mostly, these human errors are made by so-called inadvertent insiders who may be compromised by phishing attacks or have their devices infected, lost, or stolen. The average cost of human error in cybersecurity is $133 per record. And it takes organizations about 242 days to identify and resolve an issue related to such inadvertent actions. 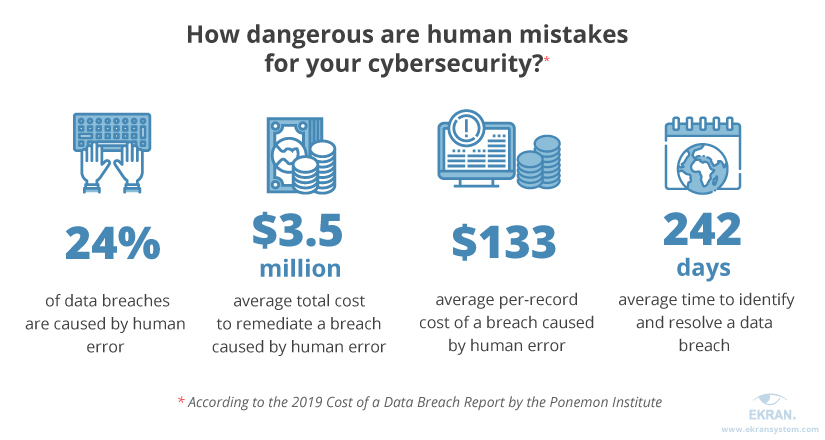 A password management policy is a must for every organization. Whether or not a company uses additional security measures such as two-factor authentication to enhance access to sensitive data, it has to establish clear rules about using strong passwords and define procedures for properly handling, storing, and sharing passwords.

Last but not least, incorrect handling of passwords can also cause issues:

Ensuring a reliable password policy seems a simple thing to do. However, even large enterprises can make mistakes.

In 2018, Veeam, a backup and data recovery company, detected an exposed database with more than 200 gigabytes of customer records including names, email addresses, and some IP addresses. This database didn’t have a password and could be accessed by anyone who knew where to look.

When employees work with a massive amount of data every day, they’re likely to make mistakes leading to data leaks. Major reasons for this are negligence, tiredness, lack of knowledge about cybersecurity threats, and not understanding the value of the data.

The most common and dangerous mistakes employees make when handling data are:

Even government and military services aren’t immune to human errors involved in information security. In 2018, the U.S. Marine Corps Forces Reserve exposed personal data of thousands of marines, sailors, and civilians by sending an unencrypted email with an attachment containing personal confidential information to the wrong email list.

Outdated software is a hacker’s best friend, as it has known vulnerabilities and can easily be exploited.

Common excuses for negligence among employees are:

Most employees are fully concentrated on their work and don’t show too much care about security procedures. But employees that aren’t educated about major internet security rules can cause a real cybersecurity crisis in your organization.

Employing the help of an insider is the easiest way for attackers to steal credentials, get access to critical data, and introduce malware to a system. Even now, employees can be victims of phishing attacks or malicious applications that hackers use to get access to company data.

Let’s take a look at several mistakes employees make due to lack of cybersecurity knowledge:

The number of phishing attacks detected by Kaspersky globally hit 129,933,555 attempts during just the second quarter of 2019. Cybercriminals and blackmailers pretend to be email services and tax refund services to gain access to users’ email accounts. Also, they used Google cloud-based data storage services to hide their illegal content, while links from such legitimate domains are seen as trustworthy by both users and spam filters.

Employee error avoidance is the best strategy for those who want to keep their critical data secure. The absence of immediate damage to your organization isn’t a reason to leave your cybersecurity policy as is.

The only way to mitigate human mistakes in cybersecurity is to use a complex holistic strategy for preventing insider threats and enhancing your cybersecurity.

By employing the following practices and solutions, you can effectively protect your company from employee security mistakes:

Update your corporate security policy. Your security policy should clearly outline how to handle critical data and passwords, who can access them, which security and monitoring software to use, etc. Revise your security rules and check whether all current best practices are reflected in the document.

Use the principle of least privilege. The easiest and most reliable way to secure data access is to deny all access by default. Allow privileged access only when needed on a case-by-case basis. If users can only access data required for their work, you can prevent accidental data leaks and data deletion caused by employees who aren’t supposed to work with certain sensitive data in the first place.

Monitor your employees. User activity monitoring tools are needed to detect malicious activity and secure your system from data leaks and malicious attacks. The most reliable way to ensure accurate detection and prevention of security mistakes is by using employee monitoring software such as Ekran System.

Read also: 4 Ways to Detect and Prevent Misuse of Data

Ekran System is an insider threat protection solution that ensures user activity monitoring, identity management, and privileged access management. Packed with lots of useful features, Ekran System gives businesses of various sizes and in various industries insights into what actions were performed by the user, what software was used, what data and websites were accessed, etc.

This approach makes any mistakes immediately visible, allowing you to react to them and prevent damage. By implementing Ekran System into your cybersecurity strategy, you can:

Cybersecurity issues caused by human mistakes are usually less costly than data beaches due to malware. However, they still pose a serious threat to the security and availability of your sensitive data and business-critical resources.

Knowing the four cybersecurity mistakes most often made by employees, you now know what to expect and how to avoid data loss and data compromise.

By using Ekran System, educating your employees, and efficiently enforcing a well-thought-out security policy, you can reliably prevent human errors. Request a free demo or 30-day trial to see how Ekran System can enhance your business’s cybersecurity.