What Is an Insider Threat? Definition, Types, and Countermeasures

Every company has plenty of insiders: employees, business partners, third-party vendors. They all have some level of access to corporate infrastructure and business data: some have limited access to general information of low value, while others can easily access the most valuable and sensitive data.

This access is what makes insiders one of the greatest threats to a company’s cybersecurity. And this is why understanding the nature of insider attacks is so important. In this article, we take a detailed look at insider threats in cybersecurity, the causes of insider threats, types of risky insiders, and key factors for preventing, detecting, and mitigating insider attacks.

What is an insider threat?

Sometimes, the biggest danger comes from within.

Insider threats are a vital cybersecurity problem for many organizations. According to the Verizon Insider Threat Report 2019, 34% of all cybersecurity incidents in 2018 were caused by inside attackers. At the same time, the percentage of organizations that feel vulnerable to insider attacks is much higher – nearly 90%.

But what is an insider threat at its core? The CERT Coordination Center at Carnegie Mellon University offers a general insider threat definition. They see an insider threat is “the potential for an individual who has or had authorized access to an organization's assets to use their access, either maliciously or unintentionally, to act in a way that could negatively affect the organization”.

Sometimes, the term insider threat can also be used as an alternative for insider attack, referring not to the potential to act but to the actual act of an insider compromising an organization’s network or computer system.

While a popular topic among cybersecurity specialists, there’s no gold standard for classifying insider threats.

One of the most common typologies is presented in a report by CA Technologies. They split all insiders into two large groups based on their intentions: 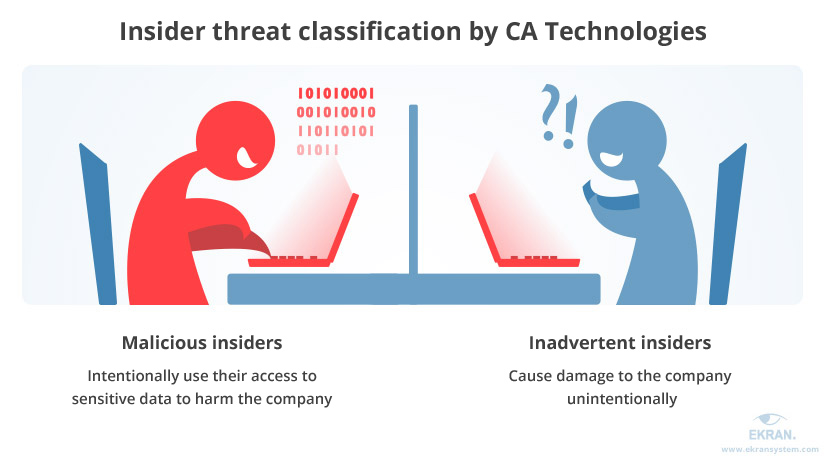 However, we can add a bit more granularity and specify three types of insiders:

In this classification, compromised accounts are also considered an insider threat because when an outsider enters your infrastructure under the credentials of a legitimate user, the system sees them as an insider.

However, the most granular approach so far has been taken by Verizon in their recent 2019 Data Breach Investigations Report. They split all insider threats into five groups:

This typology provides the most granular approach to the classification of insider threats, covering a wide range of reasons for an insider attack: malicious intentions, industrial espionage, negligence, emotional motivations, and even third-party vendor-related risks.

The key risks and challenges of insider threats

You can’t prevent something you don’t know about.

The main problem with insider attacks is that in contrast to outside attacks, they can remain unnoticed not for weeks or months but for years. Outside attackers usually act suspiciously from the moment they invade your system. But malicious insiders, for the most part, act normally and perform their daily duties. They only spend a limited amount of time on their malicious actions, which makes it much harder to detect the exact moment of an attack.

Insiders have a number of obvious advantages over outside cyber criminals:

What’s most important, stealing or harming valuable data is not the only threat they pose. Insiders can do a lot of other risky things:

Basically, if there’s an ongoing insider attack in your company, all your valuable IT assets are in danger: networks, file servers, cloud storage, databases, and even endpoints. There are also a number of risk factors that can increase the possibility of such an attack. The most common and critical are:

Detecting and mitigating an insider threat in a timely manner should be a top priority for any cybersecurity officer and business owner. In the next section, we talk about the indicators that can help you detect an internal threat and the most effective ways of mitigating the risks of insider threats.

Read also: Shadow IT: What Are the Risks and How Can You Mitigate Them?

Prevention is the key.

There are two basic scenarios for dealing with an insider attack: You can act preventively, trying to prevent an attack from happening in the first place, or actively, responding to it efficiently and in a timely manner. Of course, to get the best possible result, it’s best to combine these two approaches:

So how can you prevent an insider attack?

There are several key points you should pay attention to in order to minimize the risk of an insider compromising your company’s cybersecurity:

Your employees should know exactly what they can and cannot do, what the allowed scenarios are for working with sensitive information, what they should do in case of a cybersecurity incident, and so on. All this information should be included in your cybersecurity policy and personalized in smaller guides for particular departments and roles.

Access management. The best way to prevent employees from misusing their access privileges is to grant them only the permissions they really need. Role-based access control is one of the best ways to ensure the required level of access granularity. It also can help you limit the scope of allowed operations for each role to a secure minimum.

Multi-factor authentication (MFA) is a commonly acknowledged best practice for securing valuable assets and effectively managing access to them. Another possible approach is implementing a zero trust security model, when access to a critical asset is always limited and always requires additional approval or user identity verification.

Read also: Zero Trust Model: Can Trusting No One Be the Answer to Your Cybersecurity Problems?

Technical controls. Since data is usually one of the main targets of cyber criminals, you need to make it harder to tamper with your critical data. For instance, regular data backups and the deployment of data loss prevention tools can limit the risks associated with damage or loss of valuable information.

USB management tools, on the other hand, will come in handy for preventing your employees from using unauthorized USB devices for installing malware or copying corporate data for personal use.

However, it’s important to clarify that preventive measures only help to minimize the risk of an insider attack. For defending your company against this cybersecurity threat, you need to thoroughly plan ways to detect and respond to insider attacks.

What’s the most important component of insider threat detection and response?

Just as with prevention, there are a number of key factors affecting your ability to effectively detect and respond to insider threats. Let’s take a look:

First comes monitoring employee activity. You need to know who does what, when, and how. Start with monitoring privileged accounts and critical assets, then expand the scope of monitored users and instances as you need.

Next, you need to take additional care about monitoring and auditing subcontractors. As they may have legitimate access to certain critical assets, you need to be able to make sure they aren’t misusing their access privileges.

Logging and auditing. Simple monitoring won’t be enough to secure your valuable assets. It’s important that your monitoring solutions gather and log data about monitored instances and users.

Also, you need to be able to audit and analyze gathered data; otherwise, you won’t be able to act on it. So make sure your activity monitoring solution allows you to form detailed reports for further auditing.

Incident detection and response. The longer an attack remains undetected, the more it will cost to remediate. But in order to detect an insider attack in time, you need to create a comprehensive incident response system. There are a number of features that you may find useful for building such a system, including:

User and Entity Behavior Analytics (UEBA). In order to combine the benefits of user activity monitoring and active incident response, you may consider implementing a UEBA solution. Such a solution gathers information on entities, both human and non-human, analyzes their behavior, and builds a baseline profile for each. This profile can then be used to stop an insider threat. When the activity of a monitored entity deviates from the defined baseline, it might be an indicator of an ongoing insider attack.

The biggest advantage of such an approach is that all data is processed by an artificial intelligence algorithm and not a human. Algorithms can analyze data more precisely and may detect suspicious patterns a human analyst would have missed.

Education. Finally, it’s crucial to educate your employees and third-party partners on your cybersecurity policies and general cybersecurity best practices. People tend to ignore security rules not because they’re rebels at heart but because they either don’t see the importance of following these rules or find them inconvenient. For instance, a problem of shadow IT is usually a sign that your corporate system doesn’t offer the most comfortable or effective tools for solving day-to-day tasks.

When it comes to dealing with insider threats, you can either deploy a set of separate tools for each specific task or use a comprehensive platform that provides you with all the functionality you need. Ekran System is an effective insider threat prevention solution that can help you prevent, detect, and proactively respond to insider threats.

Ekran includes a rich set of features for:

Not all insiders are malicious by nature: some may compromise an organization’s cybersecurity unintentionally, due to human error, personal negligence, or the malicious actions of outsiders.

The best way to mitigate the risks posed by insider threats is by combining preventive measures with insider threat detection tools and incident response practices. Ekran System covers all three tasks, allowing you to limit the risk of insider attacks, monitor and audit user activity, manage access, and respond to insider threat incidents in a timely and efficient manner.