Insider threat detection software is designed to provide full visibility into what users are doing, allowing supervisors to assess employee performance and clearly detect any malicious actions. There are many such solutions on the market, each with its own technical approach, feature set, and licensing scheme designed with a specific audience in mind.

In this product review, we compare three alternatives: Ekran System, Veriato vs. ObserveIT. We try to determine reasons to choose these solutions, their strong suits, and their drawbacks with an emphasis on highlighting differences between them.

Each of the three solutions in this comparison presents different features and benefits, with each vendor targeting a slightly different audience.

ObserveIT provides large companies with an advanced insider threat detection toolset that includes monitoring and alerting tools. However, there are limited access management tools. Current ObserveIT pricing makes this system cost-prohibitive for smaller businesses, and plans to implement a subscription model have companies of all sizes looking for alternatives.

Veriato Cerebral is an affordable solution that focuses on employee monitoring, performance review, and insider threat detection by employing user behavior analytics. But it doesn’t offer much in terms of incident response. Some Veriato reviewers also say it can have scalability issues with large deployments and that the product impacts server performance.

At the end of 2019, ObserveIT was acquired by cybersecurity company Proofpoint. So far, Proofpoint has not declared plans to change the feature set of this product. However, Proofpoint has already announced a change to the ObserveIT pricing model from a lifelong license to a subscription.

Veriato has renamed Veriato 360 to Veriato Cerebral in order to highlight its artificial intelligence tools for insider threat detection.

ObserveIT, Veriato, and Ekran System are close competitors using the similar technical approach. But each has a different feature set and licensing model that we’ll look at in more detail.

The ObserveIT price list is currently the most expensive of these three solutions. Since 2020, ObserveIT has charged a yearly subscription fee (instead of a one-time fee for a permanent license). The high subscription price makes the total cost of ownership too much for companies with small or medium-sized deployments.

Deploying ObserveIT may be tricky without online support of a product expert. Also, deploying and updating this product requires an internet connection. Once deployed, ObserveIT licenses live with agents.

Ekran System provides two types of licenses, with the price of the Standard license based only on the number of monitored endpoints – the, same as the Veriato pricing scheme.

In addition to floating endpoint licenses, the Ekran System client can be added to a golden image. The software automates license provisioning via the license pool. As a virtual machine instance is shut down, its license is released and returned to the pool. This allows users to maximize the use of a single license by automatically transferring it upon termination of a virtual machine. Also, Ekran System floating licenses support non-persistent virtual desktop infrastructure monitoring.

Ekran System is also the easiest to deploy between these three solutions. Deployment can be performed in just a few simple steps. There’s also 24/7 technical support, and product updates can be done in one click and be performed offline. 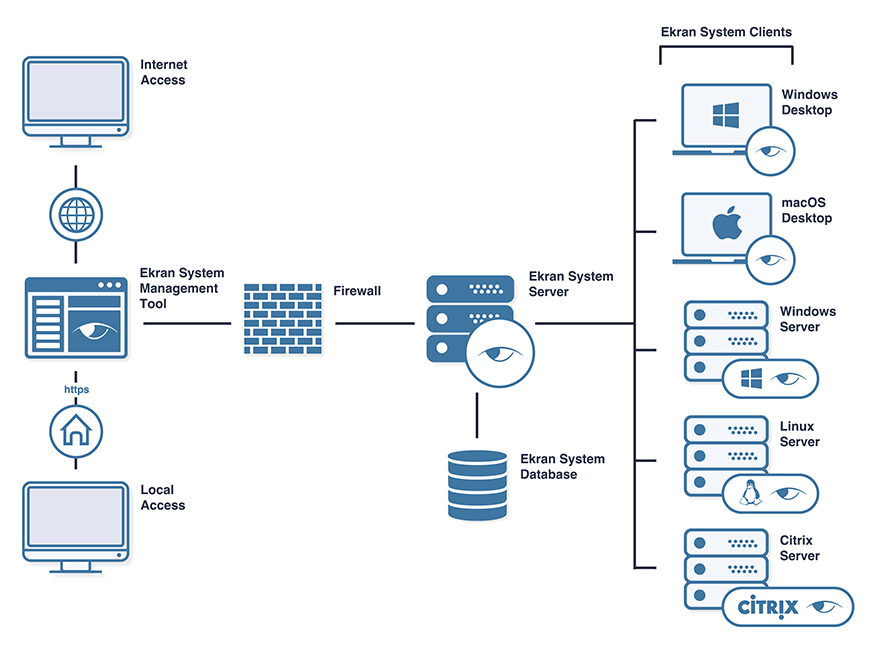 They provide video recordings of everything a user sees on the screen without any limitations for any target endpoint where the monitoring agent is installed. In addition, Ekran System records audio input and output.

The resulting recordings contain indexed video and searchable metadata including:

The main difference between Veriato Cerebral vs ObserveIT and Ekran System lies in how they treat their data streams. While Ekran System and ObserveIT present video as the main data stream – accompanied by relevant synchronized metadata – Veriato presents all data equally, with video serving mainly as an illustration of the larger metadata. Also, Veriato stores all recorded metadata in the form of separate logs.

All three solutions use different algorithms for data compression and storage. Ekran System can either save records with the original screen resolution or compress them. This efficiently uses storage space, as it allows for saving the master image and deltas. The records data structure is optimized to ensure fast insertion and deletion of records with any number of active sessions. Also, records of each session are encrypted with a unique session key.

ObserveIT saves disk space by dividing the screen into nine parts and storing those records independently. There’s no need to save recordings of static parts of the screen. However, such an approach slows down the deletion, transfer, and archiving of data because several records can refer to the same screenshot.

While Veriato features customizable alerts, allowing for efficient insider threat detection, it does not provide much in the form of incident response tools.

All three solutions have UEBA modules for user behavior analytics. ObserveIT uses this feature to display statistics on the main dashboard. Ekran System detects abnormal user activity and alerts a security officer about it.

Ekran System allows security personnel to automatically (when an alert about suspicious activity is generated) or manually block users, stop the current session, or block the current activity. It also features automatic USB blocking, which helps to protect from mass storage devices and malware distributed via USB sticks. Ekran System ensures thorough control of USB devices by establishing a manual approval procedure. When a device is connected, a user has to file an access request. A security officer may allow or deny the connection.

ObserveIT, on the other hand, can alert or show a message upon connection of a mobile phone or USB storage device. When a suspicious event is detected, ObserveIT can forcibly message the user and inform them that a specific security policy has been breached. Security personnel can also block a user’s session if necessary.

Veriato, ObserveIT, and Ekran System all allow you to clearly distinguish between users of shared accounts by employing additional authentication measures.

Centrify vs Observeit vs Ekran System

CyberArk vs Observeit vs Ekran System